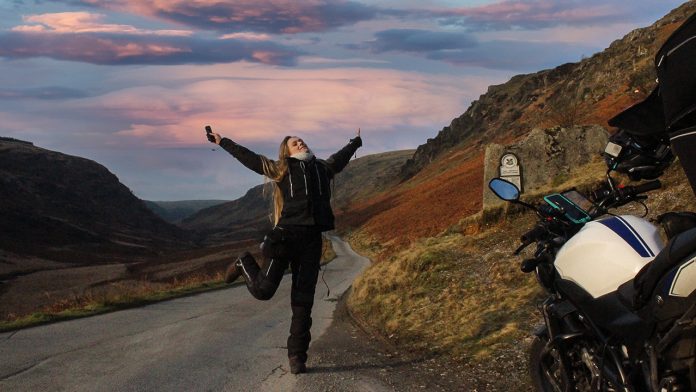 So recently on YouTube, a few of my Sprocketeers commented on the fact that they missed my silly travels and truth be told I’ve been missing them too. But you know how it is, it’s winter, it’s tough, a lot of the time it’s just not fun.

Motorcycling in Winter in Wales

This is my first winter riding and in all honestly, I’ve been avoiding the bike as much as most bikers have. I personally struggle massively with the cold weather, even when I’m not on a bike – so the thought of a 60mph wind chill against my skin was enough to put me off until Spring.

However, my itchy feet got better from my annual leave allowance and I decided to grab some heated clothing and embark on a manic motorcycle trip once more.

What is the Devils Staircase?

So what is the Devils staircase I hear you ask? Well, it’s a 1-mile track of road with a 21% gradient and multiple hairpins turn located in the heart of the Cambria mountains.

However, to reach the staircase, you have to make a 20-mile journey from the nearest town, through a national park.

To reach that 20-mile starter marker, I first needed to travel 110 miles south from my home town. 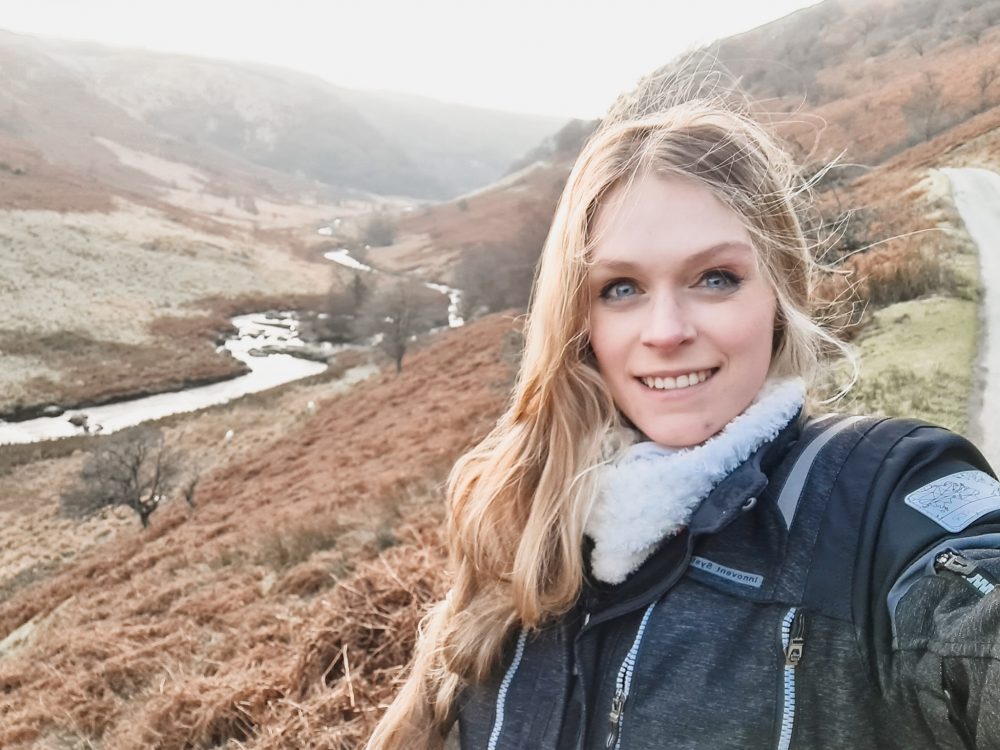 Riding in winter with battery issues

Straight away I was off to a bad start when my motorcycle battery decided today was the day it would die.

If you’ve been following my journey, I’ll know this isn’t my first run-in with battery issues and after not riding my bike for a few weeks, it seems to have gotten progressively worse. Things especially took a turn for the worse an hour later when I arrived at the petrol station and needed to fill up.

I began frantically hunting around for a solution. Once the panic settled down, I quickly began to realise that I was in fact, sitting at a garage – opposite two more garages. 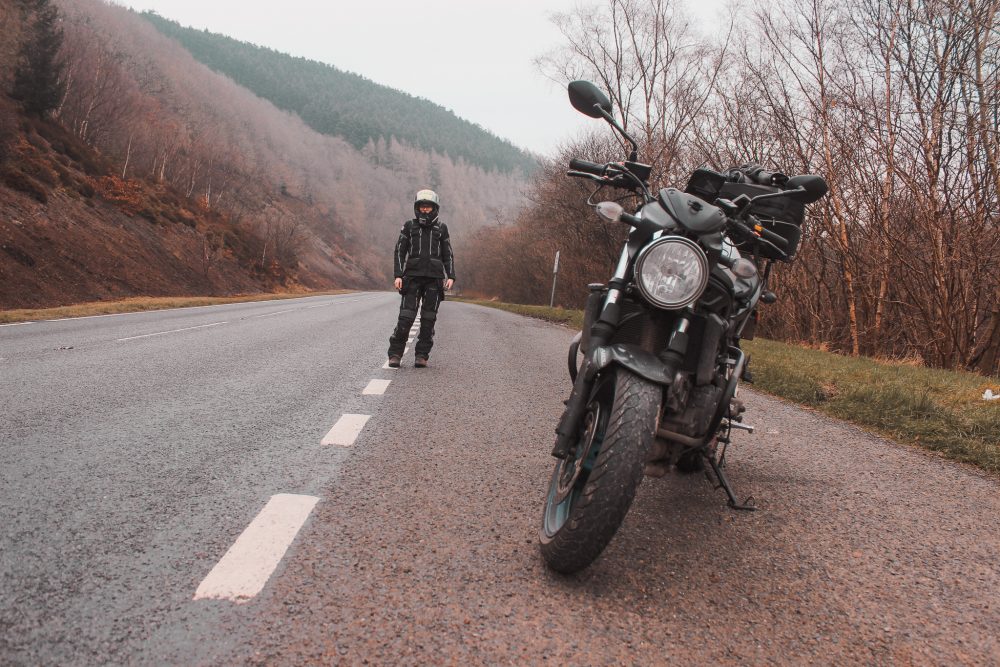 After politely asking for help I was back on the road. However, after a lengthy morning start – or jump-start shall I say, despite an early start, I effectively lost the entire morning. By the time I’d run the bike around, stopped for lunch and coffee and then hit the road again, it was already rather late.

Nonetheless, I calculated the amount of time until sundown had and I knew that I’d still be able to have enough time to at least make it to the top of the Devils staircase. 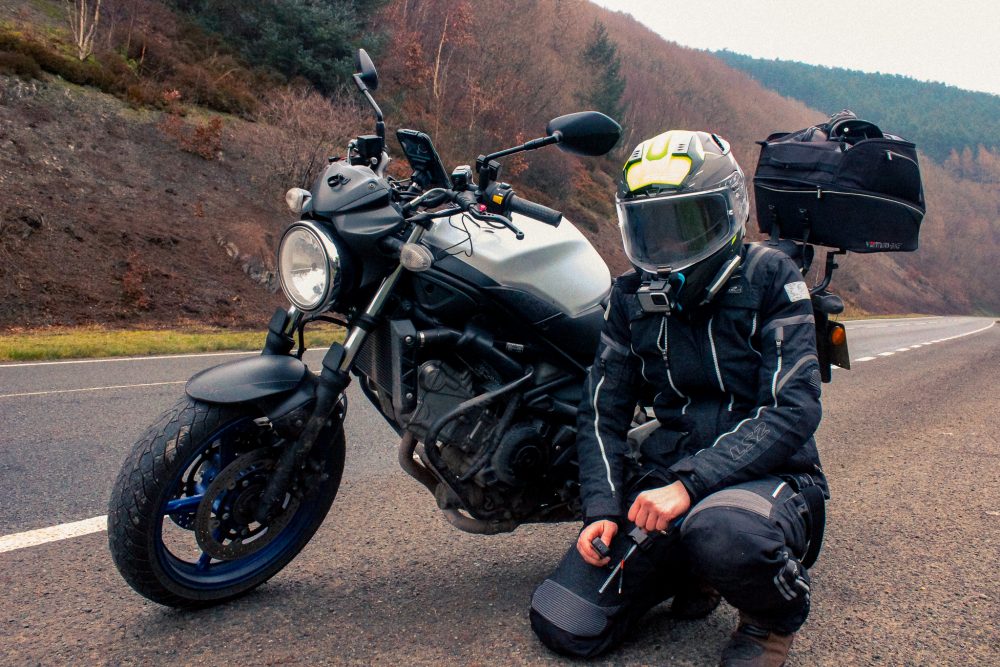 Reaching the Devils staircase on my motorcycle

Once I reached the 20-mile starting point. It came with its own set of unique challenges.

I quickly lost my phone signal. Combined with a battery on the fritz, it means that I had to be extra cautious choosing when to pull over for filming. If my battery were to die in the middle of the national park, it’s going to be a long, long, long walk for help.

The other challenges I was faced with were terrible roads, a complete lack of directions and giant fuck off lorries that could squish me at a moments notice.

However, this wasn’t enough to stop me and I rolled onwards and upwards. You can view all the videos on my Motorcycle YouTube Channel.

Watch day 1 of my motorcycling trip below

Heading back to the hotel

As I continued to roll down the hill into the sunset, a little teary, I couldn’t help but reflect on all the wonderful things that I’ve experienced in the last year.

The highs, the lows, the good, the bad, the terrible decisions and wonderful escapes but most of all, I felt grateful for this new life that I had forged for myself and all the amazing things I’d have to look forward to in the next year.

Of course, all of this was short-lived as I then promptly rolled into a storm on the other side of the hill. 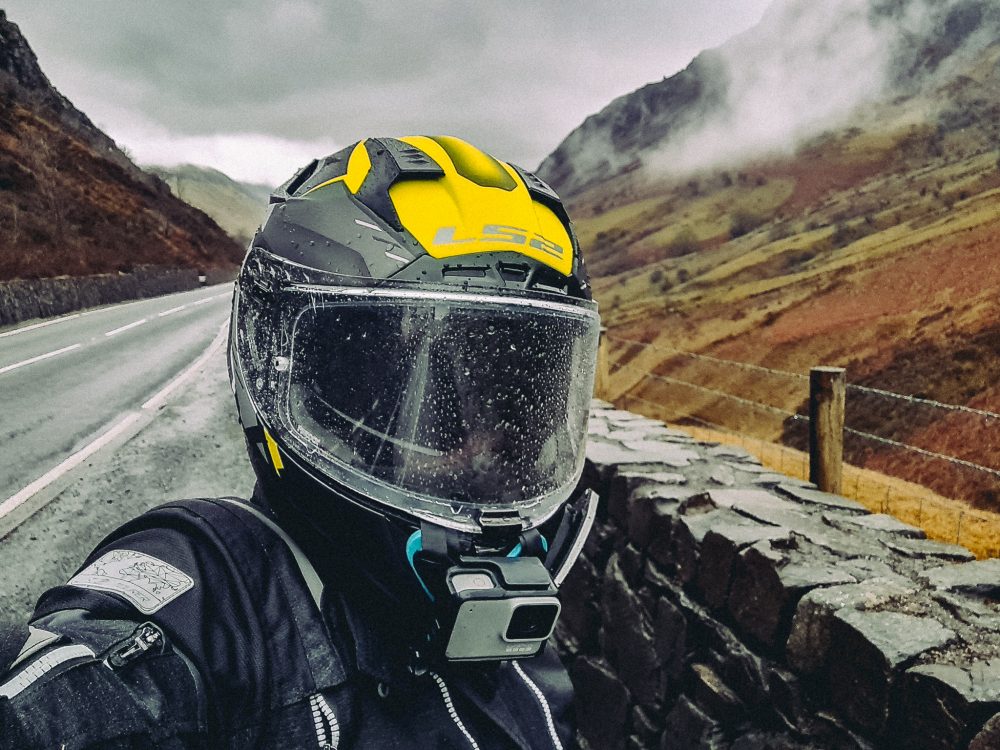 Day 2 of motorcycling in Wales

So after spending the morning riding down some random Welsh tracks and lunchtime creating a new UK Motorcycle guide. I realised that I hadn’t left much time for me to ride back down South to the Black mountain lanes. I looked at my clock and calculated that I’d still have 2 hours to play with like sunset.

However, after my newly installed confidence from the day before, I was certain I could make it and simply ride back in the dark.

One thing I didn’t account for, was just how bad the weather was going to turn. After riding in adverse conditions for nearly an hour, I was struggling and the black mountain lanes were still an hour away, I decided to stop at the nearest pub in an attempt to dry off before embarking onwards.

As I sat drying off by the fire as quickly as I good, I was becoming increasingly frustrated watching the weather get steadily worse. I waited another 15 minutes in hope that it may lighten up. However, unfortunately, by this point, I had to accept that my goal for the afternoon would not materialise and I would head back to the hotel. 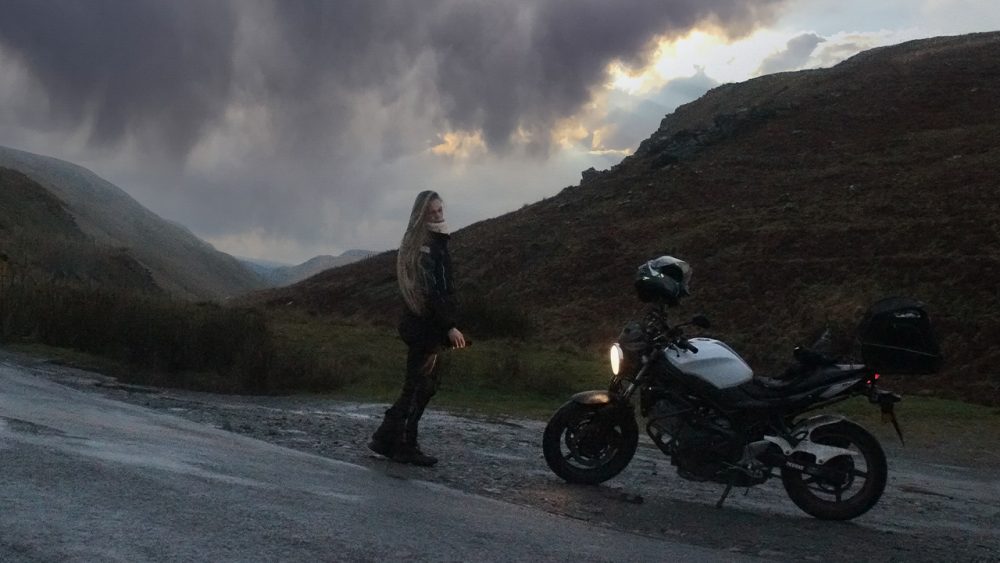 Riding in winter in the dark and the rain

Now I won’t lie, it was a 90-minute ride back to the bed and breakfast and whilst my heated gear kept me nice and toasty, my feet were suffering from another fate.

Truth be told, the moment the sun went down, I became extremely terrified. My feet became soaked through after 15 minutes of riding. Visibility was extremely poor, I could barely see out of my visor, street lights were far and few between, the rain continued to pour down and although my heated gear was keeping my body temperature up, my feet were so cold and painful that I genuinely wanted to cry. I was torn between wanting to speed up to get out of the rain and wanting to slow down in order to make sure I didn’t lose grip.

What was supposed to be a 45-minute ride back to the hotel felt like an eternity. There were several occasions I ended up having to pull up on the side of the road to give myself a mental pep talk. And in all honestly, by the time I got back to the hotel, I felt somewhat shell shocked from the experience

Unfortunately, the hotel has other plans.

Watch day 2 of my motorcycling trip below

The final day of the biking trip

It was day 3 of my motorbiking trip and I was determined that today was a new day.  I woke up extra early in anticipation of what I had decided was going to be the best day ever day.

With the hotel still largely being vacant, I wasn’t really sure how to check out so I decided to let myself into the bar, leave my room key on the side and hope that Casper the ghost would be able to find it.

After that was taken care of, I loaded everything up, only to realise I had left my bike jacket in the room, so I wandered around the bar for the room key, went back and grabbed my coat, wandered through the bar again and hey presto, I was finally on the road again. 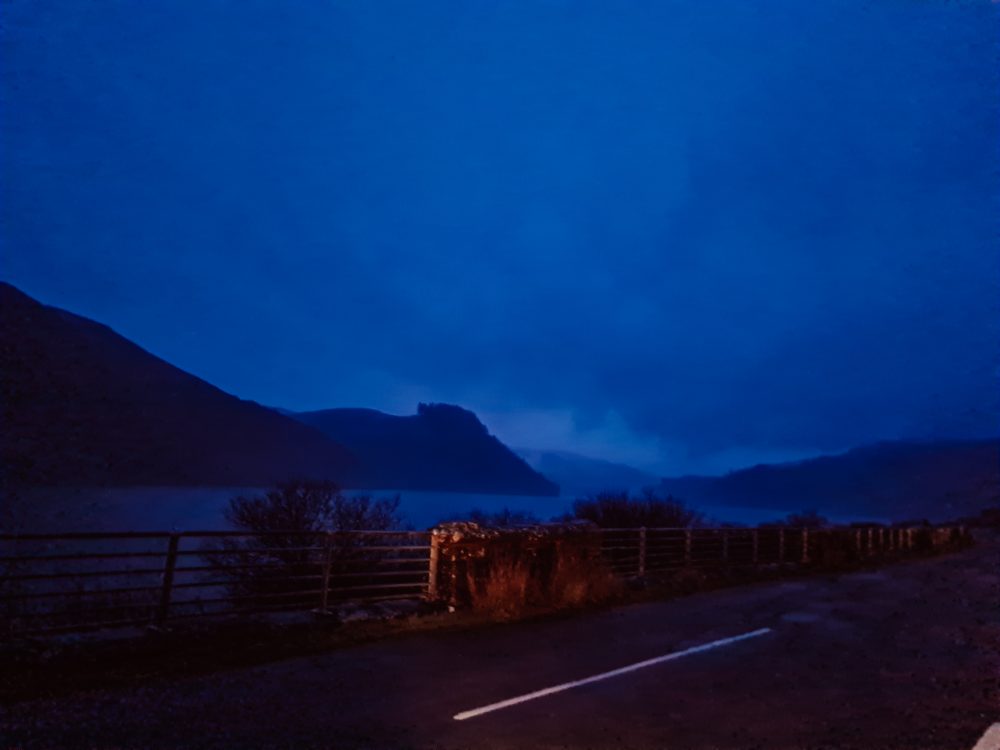 Now in order to get to Aberystwyth, the route that I had intended to take was through Elan Valley following the reservoir up to Route 81 and eventually onwards.

Now unfortunately for those of you who are viewing at home, the GoPro seriously didn’t do the view any justice whatsoever but basically it’s about 45 minutes pre-sunrise and the moon is bouncing off the lake – and it was incredibly stunning. 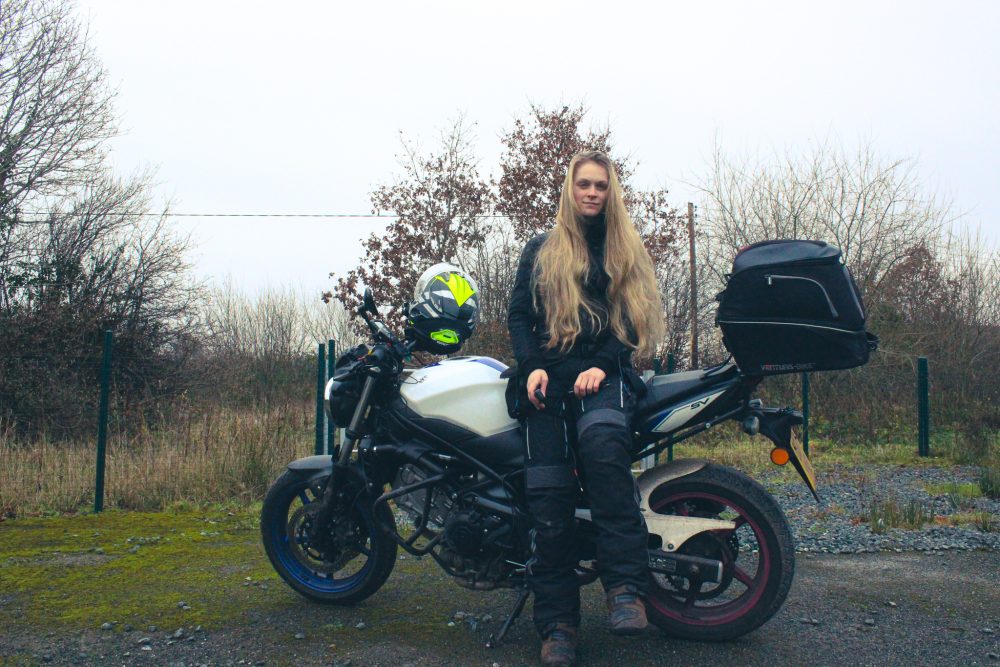 Now it was raining – however, it was more of a fine mist and I was l tucked up in my heated clothing. As I continued to make my way along the reservoir, my journey came to a halt when I quickly discovered that the remaining route was closed.

Now I was a little frustrated because I have literally watched a lorry come through that road so, in my head, I knew physically the road was good enough to transport a heavy goods vehicle but also I was well aware that I would

As decent as I believed my bike gear was, I didn’t really fancy testing it out against a truck. 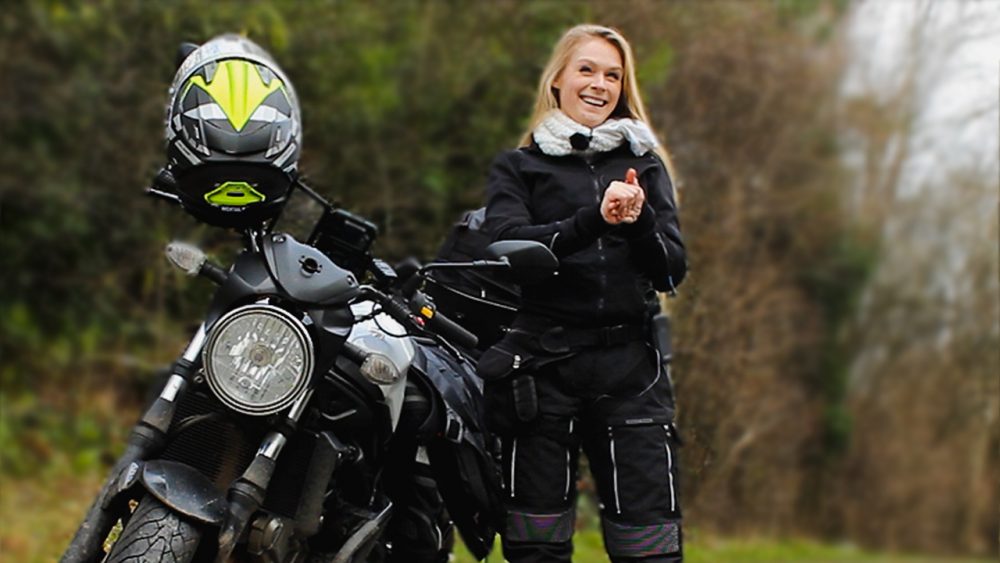 Trying to find an alternative route

I equally felt really annoyed at the idea of having to go back on myself so I decided to cross the reservoir via the bridge to see if I could follow a road I spotted on Google Maps. However, I quickly came to realise that this road would mean off-roading around a forest and there were no guarantees that I’d be able to get out on the other side.

So as annoying as it was, I had to go back on myself. This meant after 1 hour and 20 minutes of riding before sunset were effectively worthless and I was back at the hotel.
However, nonetheless, I was still determined after yesterdays escapades that I would make today a fantastic day regardless of whatever challenges I faced.

Watching the sunrise over the hills

As annoying as having to take the long way around the bypass, I was also kind of grateful that it happened. Because not only did I get to enjoy the water view at dusk, I additionally got to enjoy the sunrise over the mountains. It also forced me to reflect on this trip and the life lesson that I would be taking away with it.

I think that it’s easy to lose ourselves in a world where we’re constantly bombarded with imagery of what it means to be successful. The fact that I was so driven to make this final trip the best trip of the year, to seek out adventure, to make it the closing statement of 2021, but actually, it already was. But actually- as I came over the mountain, reality hit me, the only thing this trip really needed, was for me to enjoy the moment, enjoy the views, enjoy the ride and most of all, enjoy myself. 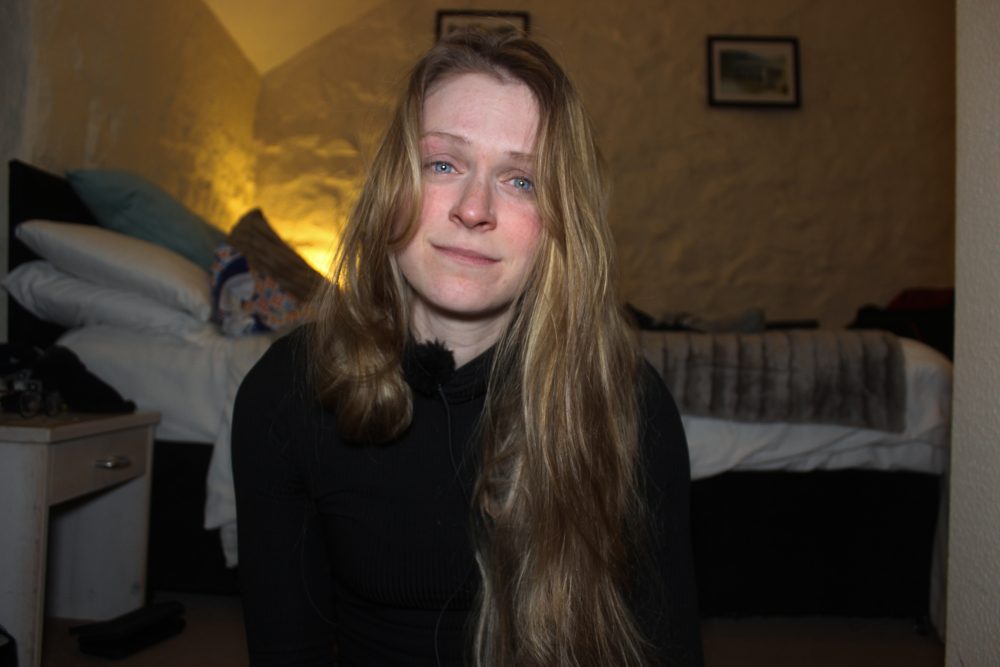 Despite the rain, and knowing I could have saved myself over 2 hours of travelling had I taken the risk of following the road. I was still determined to enjoy my day, I decided to pull over in said rain and well, simply enjoy it.

Well, for a whole 2 hours until I lost my bike key at a Mcdonalds then resume angry saffron

So after being reunited with my motorcycle key, I checked the weather forecast and realised I was in for a less than fun ride home. However, with my newly determined positive mindset and a full tank of fuel, I was ready to take on the famous welsh weather once more

Watch day 3 of my motorcycling trip below