The arrival of autonomous cars has sparked a lot of uncertainty about the future of motorcycling. AI-driven automobiles are intelligent, logical machines with cutting-edge technology and innovative safety systems. Motorcycles are rather antiquated by comparison.

Motorcycles can be deadly, uncontrollable, and thrilling to ride. However, how will they fit into our AI-driven future? Will we be forced to give up riding forever? Or will motorcycles and autonomous cars be able to coexist on the road?

There are several different schools of thought on the issue, and it’s too soon to tell who’s right or wrong. Right now, all we can do is guess.

A 2019 study released by the European Automobile Association (ACEM) has fueled a lot of speculation with its answer to the following question: “How will automated cars affect motorcyclist safety?”

Despite the name, this publication is not particularly heavy reading. We recommend you read it since it’s surprisingly light reading. But if you’re in a hurry, here’s the short version. It questions the capabilities of sensors and their capacity to detect motorcycles and other vulnerable road users. Here are a few key quotations:

“The systems work quite well in some situations, such as detecting larger objects, with a defined or standardised shape, such as cars, trucks or traffic signs. However, the detection of smaller dynamic objects presents challenges to sensors and algorithms, just as it presents challenges to human perception. Therefore, automated systems should significantly improve the detection rate of motorcycles.

“Due to their many different shapes and vehicle dynamics when compared to cars, as well as their small surface area, motorcycles pose an enormous challenge to the developers.”

The paper was based on research conducted in the Netherlands by the Federation of European Motorcyclists’ Associations, the Royal Dutch Motorcyclists Association, and the Motorcycle Action Group. The study revealed that autonomous vehicle sensors are unable to cope with motorcycles.

Many simply don’t understand the technology

The majority of the criticism levelled at autonomous vehicles and their sensory shortcomings stem from a lack of understanding about how the technology works. On-board cameras are not only used to record events.

They’re trained to seek out data, and the more data they have at their disposal, the better. The AI gets smarter as more data is collected. With more contributors giving data, these autonomous cars will learn to search for motorcycles as humans never could in the future.

Motorcycle sensors have already begun to hit the shelves

Fast forward to the modern-day and only a year has passed since the first radar-equipped bikes began to hit shelves, but new firms are springing up every day.

Radar is fast becoming the must-have gadget for motorcyclists, and with new personalities like Israel’s Vayyar entering the competition, the stage is now set for a technology struggle that will drive rapid progress.

Bosch was the first to supply front and rear-facing radars on production motorcycles. Ducati, BMW, KTM and Kawasaki all adopted the technology. However, we’re already seeing more firms get involved.

Back-facing radars will be installed on Triumph’s new Tiger 1200 GT Explorer and Rally Explorer. Piaggio is expected to reveal their first bikes that are equipped with Vayyar radars.

Vayyar’s system is different from Bosch’s previous offering. The technology was dubbed “4D” by the company and utilizes a lot more antennae than a normal radar, generating a high-resolution 3D point cloud image of the world around it and utilizing Doppler analysis to calculate object speeds.

The Vayyar radars’ greater number of antennae results in a 170-degree field of vision both horizontally and vertically, which is larger than the radar cone of conventional systems. On a bike, the wide field of view and vertical coverage allows the sensor to keep track of an item as you turn.

According to the manufacturer, Vayyar’s system has a greater range than the market-leading Bosch radar (160m vs. 300m). That’s significant because motorcycles can’t use automated emergency braking systems like those found in radar-assisted automobiles.

The ability to see hazards at a greater distance and provide warnings or automated assistance sooner due to fact that a motorcycle brake-assist can’t be forceful. This is because sudden braking may throw the rider off. Being able to identify potential dangers at a greater distance and offer alerts or automatic aid sooner is an important advantage.

According to Vayyar, the system, which includes both front and rear radars, can provide blind-spot warning, lane-change assistance, adaptive cruise control (ACC), front and rear collision warning, and rider-brake assist at a fraction of the cost of current radars (for comparison, the Bosch front radar option on BMW’s R1250RT costs £500). 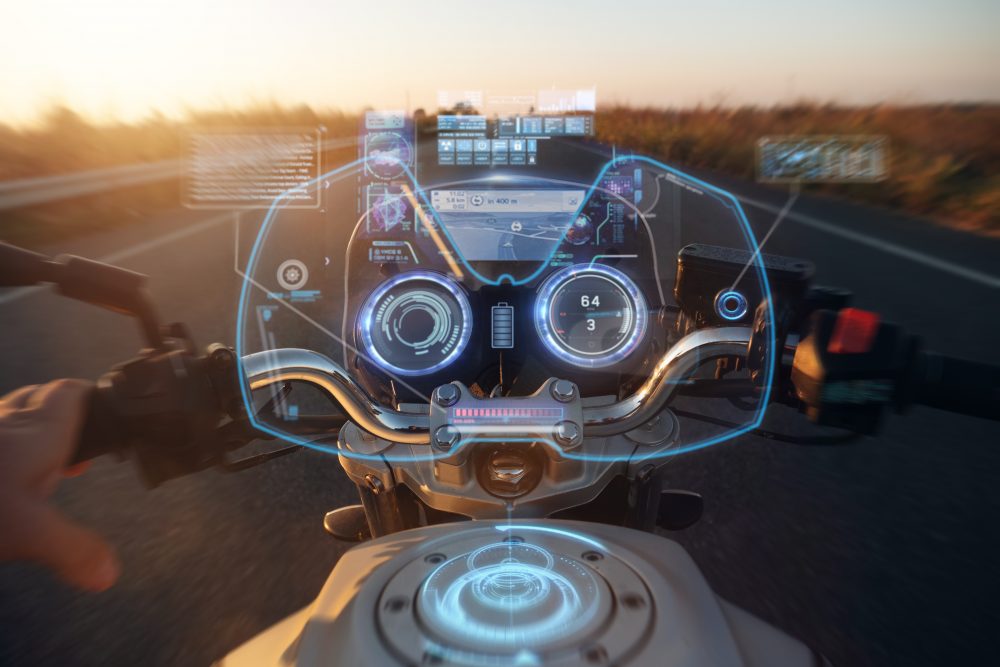 The implementation of radar systems in bikes and what it means

Will radars mean the end of motorcycling?

Until the technology matures further, the deployment of Autonomous Driving-Ready Streets will be gradual and confined to small areas. University campuses, business parks, closed communities and closed designated spaces are excellent testing grounds for technologies like this, as well as businesses. The rollout will be gradual; while it does grow, motorcycles will be incorporated within it rather than being excluded from it.

As long as motorcycles are still a lucrative market for manufacturers, and as long as there are still many individuals who wish to ride them on public roads, governments will have to regulate accordingly, and manufacturers will need to develop new technologies.

What does autonomous technology mean for motorcycles?

It’s too early to tell which way the wind is blowing and how autonomous vehicles will truly disrupt the motorcycle business right now. Whilst it is conceivable that motorcycles will be phased out as more fuel-efficient, electric, and AI-controlled transportation becomes popular. The likelihood is that motorbikes will be reworked to become an essential component of today’s micro-mobility puzzle. Basically, evolving with autonomous cars rather than being replaced by them. However, it will again entirely depend on the market.

Automotive trends follow the market, and they will continue to develop and adapt to the demands of customers. Despite government or technological corporations’ needs, desires, and goals, that change won’t happen overnight. The transformation from internal combustion engines to electrical motors has taken a century in the making, but it isn’t finished yet. The transition from manual to autonomous vehicles may take even longer.