We have witnessed some of the most incredible motorcycle concepts this year. This is particularly true regarding wearable technology, from AI Helmets to onboard computers. However, while prototypes have been flying out of the factories, very few companies have successfully created commercial models, even more so for models readily available for purchase. At least, that was the case until one futuristic motorbike, Vector Motorcycle, joined the arena.

Arc Motorcycles – What you need to know.

Arc was founded by Mark Truman, former leader of Jaguar White Space. He is, quite frankly, a man of pure innovation and creativity. It is no secret why both Mark and Arc have quickly become media sensations.

The Arc Vector is the most advanced electric motorcycle created to date. So what’s different about the Vector? It’s the fact that the bike has been kitted out with the most advanced technology to date. It certainly gives you somewhat of a Batman vibe. The combination of its striking design, futuristic technology and the removal of a petrol engine will surely provide you with one hell of an experience.

The bike can only be described as a rush of technology onto the motorcycle market, incorporating design, clothing and safety all at once. This machine shreds up the current perceptions of motorcycles being loud and polluting. It is “the cafe racer of tomorrow” that is “as big on the soul as it is on technology“. The Vector claims to be a new connection between biker and machine, a glimpse into the future of motorcycling.

To top it off, the Vector boasts some stunning visuals and mind-blowing technology and combines what the company refers to as a sensory and emotional experience through wearable technology. Unfortunately, the wearable tech compromises the Zenith helmet and the haptic jacket, which connect to the ‘digitally enhanced’ bike.

Not only did Arc design and build a motorcycle of the future, but they are readily available to the public. Having been built by a team of great engineers in Coventry, it’s hit the European and UK Motorcycle trade shows with a bang. After being launched at the most prominent European show of the year – Milan’s EICMA Motorcycle Show, the Vector instantly became the show’s star. With hundreds surrounding the machine in awe, it’s easy to get a little star-struck.

Made from a lightweight carbon-composite structure and ingeniously elegant battery-module monocoque, the Vector looks like a classic British Cafe Racer. The bike has a top speed of 150 mph (241 km/h), and more impressively, it can go from stationary to 62mph in 3.1 seconds, allowing for quick getaways and a little fun at the traffic lights.

Getting more in-depth with the bikes statistics

The Arc Vector utilises exotic materials, contemporary architecture and cutting-edge, innovative technologies, which have never been applied to two wheels before! The bike has been fabricated by non-conformist experts, straying away from the norms of the motorcycle world. It unites world-first technologies, best-in-class performance and quality. It’s guaranteed to get you noticed by a group of like-minded individuals. The Vector is on the road to perfection, if not already at its final destination.

The Vector is hand fabricated and has a carbon-composite structure and a unique battery-module monocoque. This brings cleanliness and efficiency to an already appealing motorcycle. Having been designed with the classic spirit of a cafe racer, the Vector encompasses freedom and high fashion. As a result, iIt’s a bike desirable to both old-school bikers and new-age technology nerds. A combination of the carbon-composite structure and the featherweight of the machine contributes significantly to the bike’s overall performance.

The Vector possesses both front and rear carbon swingarms and Ohlins dampers (custom-made individually for the bike) for telepathic handling/feedback between man and machine. It also boasts meaty Brembo brakes and anorexic BST wheels. The complete package tips the scales at just 220kg. This is almost 60kg lighter than any of Vector’s closest competitors. As if this wasn’t enough, the Vector also has the most incredible power-to-weight ratio of any of the electric bikes on the market, as if the Vector wasn’t showing off enough already! 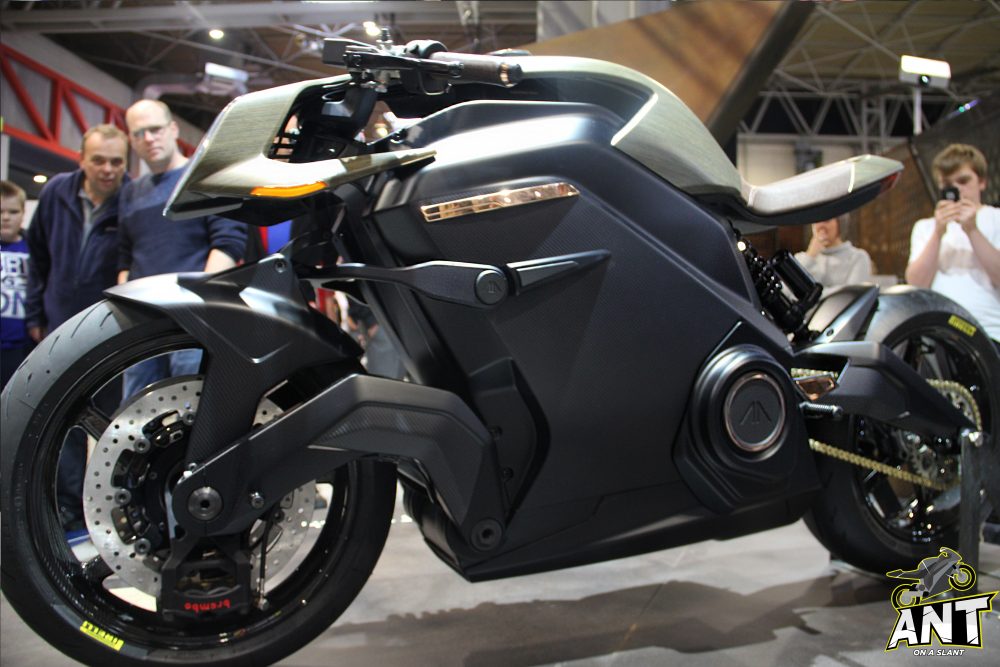 Mark Truman is a purist biker. He is a man with a clear vision to unite speed and aesthetics and create as little environmental impact as possible. Along with a crack team of like-minded innovators, Truman “took a wide-angle view of what mobility in the future could be, and using some big ideas and immense agility, have brought it into the present”.

Instead of an old-fashioned petrol engine, the Arc now comes with a new EV battery allowing for a wholly charged motorcycle in just 30 minutes. It is an international superstar that Samsung makes these cutting-edge battery cells. They are the first to unleash this kind of technology in motorcycle production. Moreover, the battery cells are made so that the production team can wrap the bike with design flair without being compromised by the traditional and bulky battery block.

The power cell produces 399 units of voltage and boasts a range of 120 miles (193 km) on the motorway or 200 miles (321 km) in urban areas. It amounts to about 30% more content than any comparable EV battery. The motorbike’s quick charging capacities combined with the availability of free electric ports popping up around the UK means switching to an electric bike becomes increasingly tempting. Something to also be noted is that Arc’s batteries are the only motorcycle batteries to be tested to Reg100 standards. Automotive OEMs usually undertake this test.

Simply put, the Arc Vector won’t let you down, whether your journey is a 5-minute commute to work or you fancy popping to the coast for a spot of fish and chips. And with such a short charging time, by the time you have refuelled yourself, the Vector will be ready too.

The Vector has a reduced steering angle, which means it allows for maximum agility. In addition, the pro drive setup offers more resistance than the standard fork setup: more stiffness in the swingarm, less steering angle, a shorter wheelbase, and the separation of the steering and suspension forces.

It’s a futuristic electric machine with a Human Machine Interface (HMI), which lets the bike interact with the rider. The bike’s geometry has performance in mind, even going as far as designing a pro-dive setup allowing for more resistance than a standard fork setup. In addition, the swing arm and direct-connection scissor arrangement allow for more stiffness and less steering angle. It also means a shorter wheelbase leading to the separation of steering and suspension forces.

The Arc Zenith: The Head Gear

Not only is the Arc Vector an innovation of technology, but the safety gear that goes with it is something you would almost expect in a fiction SCI-FI movie.

Arc has designed a motorcycle helmet that encompasses a rear and a back view camera and collects fundamental data, for example, your riding speed. A HUD display helmet gives the rider relevant data, enabling him to be careful on the road. The helmet incorporates a rearview camera which acts as the eyes of the rider at the back of his head. Combining this with an on-screen display, you’ve got a truly spectacular piece of equipment. The helmet mimics what you expect from a fighter pilot helmet. It integrates a HUD (Heads-up display) to give the rider maximum control over the machine. 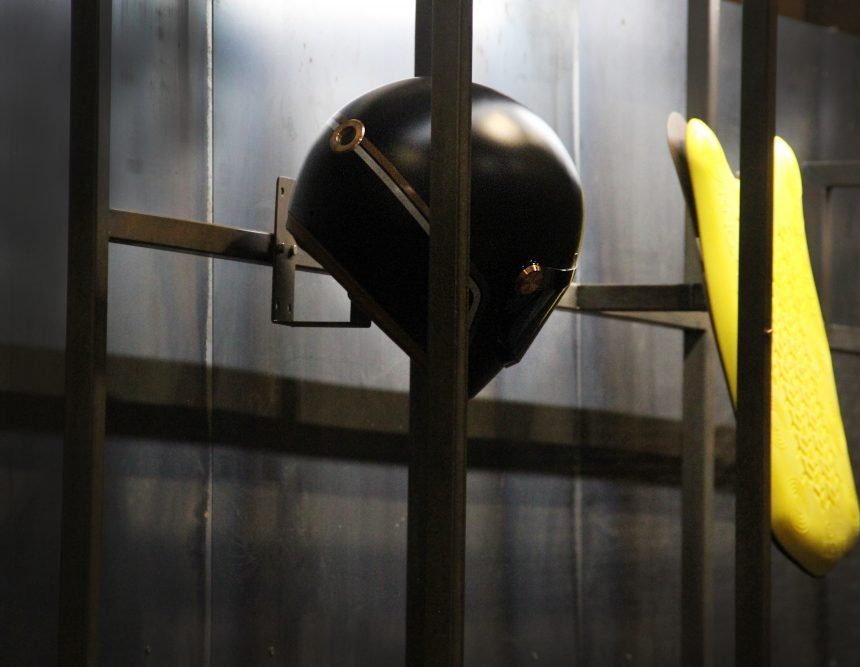 The helmet additionally has a sat-nav, speedo, and ancillary graphics projected onto the visor to allow the rider to focus all of their attention on the road ahead and the road users around them. Even behind them, thanks to the integrated rearview camera.

The helmet itself is made from composite fibre and has an antibacterial microfibre, calfskin lining and internal protective material to give access to the electronics.

The helmet is the key to the bike. So you put on the Zenith, jump on the Vector, and off you go. There is no need to fumble around for your keys on those cold winter mornings with gloves on. 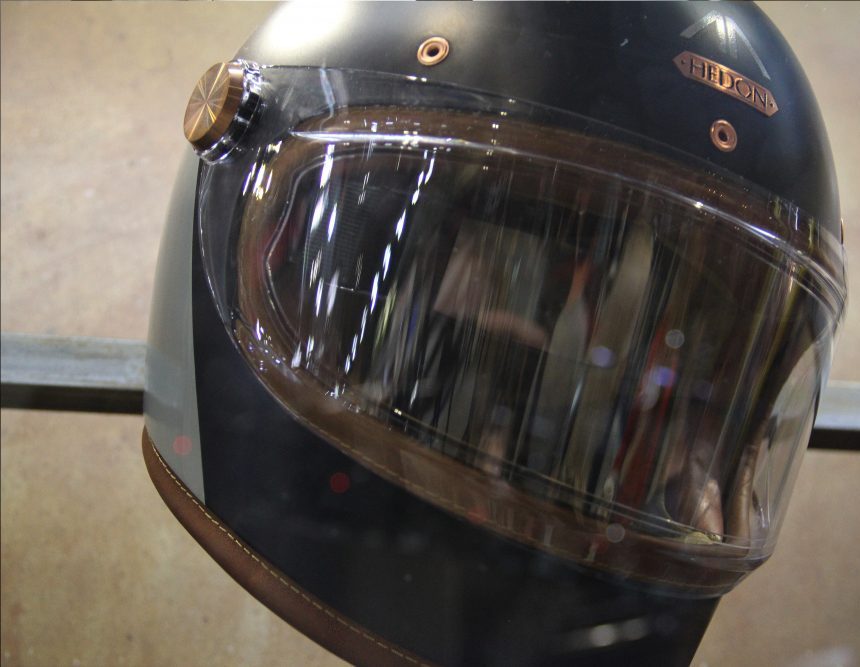 The Arc Origin is an innovation of protective clothing. What makes it unique is that this clothing can notify the rider of any potential hazards. It additionally comes with three modes designed to fit your current riding style.

After catching up with Arc at Motorcycle Live hosted by Birmingham NEC, they explained the jacket uses vibration technology combined with proximity sensors. Similar technology can be seen in car parking sensors. However, never before has the market witnessed this development into wearable technology. The closer an on-coming vehicle is to the rider, the heavier the vibrations become. The built-in technology allows for real-time feedback, alerting riders earlier and potentially saving many lives.

The jacket and helmet are intended to enable the amalgamation of man and machine. Gone are the days of individual perception of on-road danger. Welcome to a new era of machine calculation and accurate feedback. 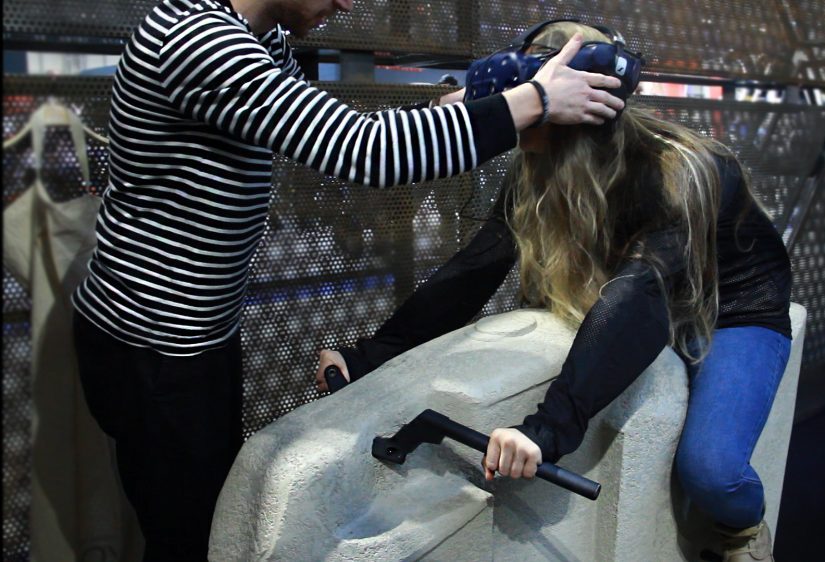 We caught up with Arc at Motorcycle Live this year to see if the hype is worth the buzz. Luckily for us, the team at Saffysprocket got to test out this new technology first-hand behind the scenes. So, having been zipped into their new Haptic jacket, I jump on board what could be described as a cardboard motorcycle.

Once the goggles and earphones were placed over my head, I was completely immersed in a new digital world. It was pretty unnerving how at home my mind felt upon this imaginary motorcycle.

The software took me through a series of roads filled with potential dangers, poor weather conditions and dangerous drivers. Then, one by one, alerts would flash up on my scene with vibration feedback from the jacket. The technology was quick and reliable, and the visuals the company had created were extraordinary and outstanding.

However, something worth noting is that whilst the software was extremely impressive, it is still just a series of pre-configurated video clips. As a result, it does make it quite challenging to assess how effective the technology would be in ‘the real world’.

With buildings emerging from the ground in front of your eyes, it’s clear that if the company’s motorcycle business doesn’t work out, they may have a solid backup plan as a video game manufacturer. 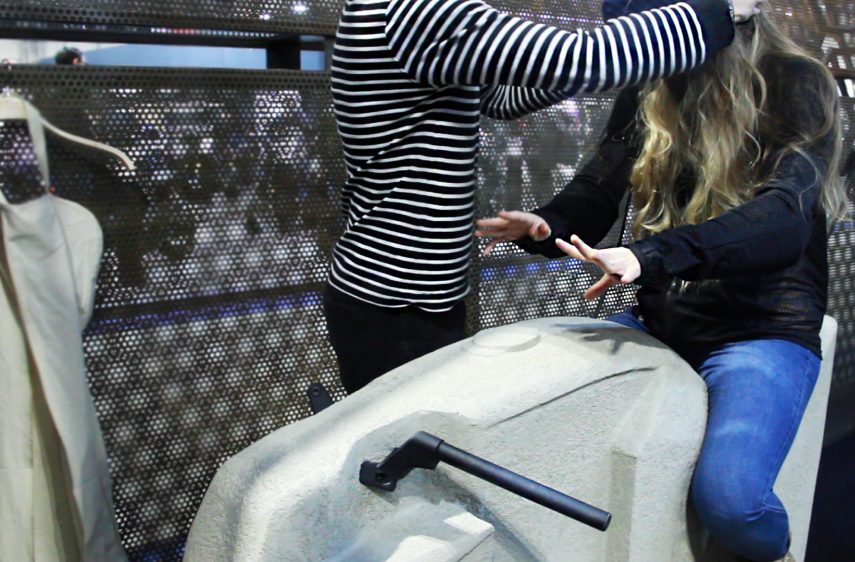 Regardless of where you stand on this new technology, you can’t disagree that the technology is undoubtedly a show-stopper. However, unfortunately, with the current price of the motorcycle, it’s unlikely that you will see these zooming around the country any time soon. So, where does this leave the biking world? Well, we predict that it is only a matter of time before this technology will be implemented across all brands. Nevertheless, there is no denying that what Arc has produced is the future of bikers, and the end is just years away.

Don’t forget to check out our other articles on the latest motorcycles.