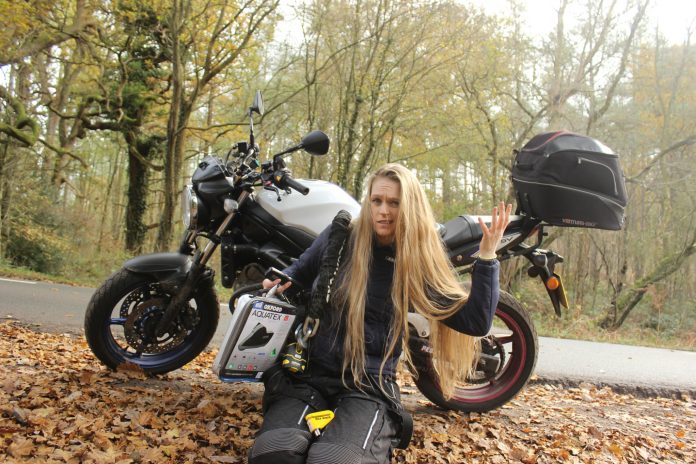 There’s a 3.3 per cent chance your motorbike will be stolen this year in England and Wales. In fact, each month, over 1,500 motorcycles are stolen in London alone – that’s 50 bikes every day! On average, only 1600 vehicles are recovered.

They’re light, portable, and the parts are valuable, making them easy to steal. A lot of bike thieves make a full-time living out of your frustration.

Let’s talk about protection now! Nothing can ensure that your bike will not be stolen, and the fact is that if a thief wants your motorbike badly enough, nothing will keep him from getting it. However, there are things you may do to reduce the danger of your motorcycle being stolen.

1. Keep your motorcycle in your sight

Is it a one-day excursion? Do you want to get your caffeine fix at a café on the way back? Make sure your motorbike is in a clear line of vision. Whether it’s outside the window or within your motorbike tent, yes you heard me – keeping your bike in view is one of the most effective defences. I’m not suggesting dragging your motorcycle into your living room and offering him a cup of hot chocolate, but I am implying that if you’re going out for the day, try to avoid leaving your bike unattended.

Most cyclists will undoubtedly have a garage, and if this is the case, it’s worth considering placing CCTV cameras on all doors and routes of access. A thief will generally lock the first thing they see – which may be a camera – so having multiple angles and cameras can act as a deterrent while also keeping your expensive bike safe.

3. Avoid parking your bike in a dimly lit area

Now that many bikers do not have garages, on-street parking is a must. If this is the case for you, look for a location with adequate illumination. The thief’s best buddy is darkness. They can be concealed by surrounding buildings, making it impossible to identify them and lessening the risk of raising an alarm. A thief is more likely to select a motorbike in a dimly lit area than one that’s constantly highlighted because they want to avoid raising concerns.

4. Park near other motorbikes

Even if your motorbike is the most attractive in the group, a crook will always choose the simplest target, and if there are numerous bikes to select from. As a result of being positioned near other bikers, you decrease your chances of having your bike stolen. Furthermore, if you’re out with your pals, it’s worth parking your vehicles close together so a robber has little space to operate.

If you own a pricey motorbike or a recently released model, you’re certain to get a lot of attention, especially from bike thieves. Owning an expensive car is a sign of pride. Try to keep your bike a secret. Assume that every one of your neighbours is a suspect. If anybody inquires, inform them you own an eight-year-old dust-roller.

6. Put your biker under a motorbike cover

Thieves frequently look for specific bicycle models. Using a cover immediately makes it less appealing to thieves. A cover also adds another time-consuming barrier for the thief. Furthermore, a crook looking under a motorcycle cover is considerably more suspicious than someone viewing your bike from afar.

7. Disk lock where you can

A disc lock helps prevent bike theft by immobilizing the motorcycle wheel. It’s one of the most effective ways to protect your bike. The advantages of this are that a disc lock is very portable and simple to transport around.

8. use a screamer alarm

A screamer alarm is a motorcycle disc lock with the added feature of a loud alarm if someone tries to tamper with it. I’m not a big fan of screamers since, in my opinion, almost everything sets them off, including rain and wind.

Another effective way to secure your motorcycle is to use a motorbike chain and lock. It prevents thieves from stealing your bike if it’s secured to an immovable object.

While a tracker won’t guarantee your bike’s theft, it does increase your chances of getting it back. Even with the poor weather, it’s still possible to spot motorcycles and get them before they leave. According to some motorcycle tracking firms, recovery rates as high as 90% have been reported – which is rather remarkable.

The first piece of advice I can offer you is to eliminate the desire of bike thieves. Don’t invest in secondhand goods. Avoid online marketplaces and auction sites. You may be paying for something late if you believe you’re getting a great deal. Bike thieves use this strategy to their advantage. They’ll focus on an industry that’s more lucrative if they can’t flip bikes and parts.

That is all there is to it; that is my best eleven suggestions for assisting in the prevention of motorcycle theft.